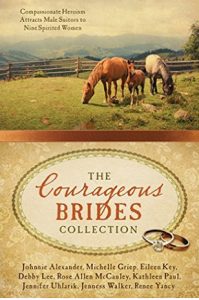 (from The Courageous Brides Collection)
Growing up, I read all the westerns I could get my hands on. Both grandfathers had the older stuff–dusty Zane Grey hardcovers and dog-eared Louis L’Amour paperbacks along with a few leather-bound editions. As an aspiring writer, I always figured I’d write westerns. Even started a few while I was in middle-school, filled with tough, gun-totin’ heroines and swoon-worthy cowboys. But decades later, this novella was my first western to finish, and I loved every minute of remembering those stories and those musty books and my grandfathers who collect them. With all that, how could I not work some of it into the story?

The names for the town and for the hero came from my favorite Zane Grey–Knights of the Range. Holly Ripple was the heroine and Brazos Keene was a minor character who stole the show much of the time. The fountain pen she used was a Waterman, and ironically enough, a later version of that pen was called the Ripple, which I did not discover until the story was already written. See? It was definitely the right pen for Lucy!

I also had help from friends. The horses and other animals were named by suggestions from people on Facebook. (Thank you, friends!) I’ve never had so many people respond to a post.

And I had inspiration of a different sort. I wrote the story after attending my first Realm Makers conference. So of course I had to work in just a teeny hint of speculative fiction. No alien cowboys or anything, but I did manage to work in a veiled reference to crop circles. If you find it, contact me! I’d love to hear from you!

The Twelve Days of Kindness

(from A Cup of Christmas Cheer Volume 4)
This fun little Christmas story was inspired by a friend’s childhood tale–the time when she and her brother (who may or may not actually be named Tonya and Brian) got into the closet with the Christmas gifts and unwrapped them before Christmas. I never heard exactly how that story ended–something about blackmail and a cat fight?–but here’s an alternate ending.

Throughout most of my stories, my friends and acquaintances make little cameos. The neighbor lady with the fluffy dog is one. Of course many characteristics of the brother and sister are based on my friend’s family. Throwing in those little details always makes me smile.

(from A Cup of Christmas Cheer Volume 1)
This Christmas story was inspired by trips to my grandparents. (Except my trips there are always delightful.) And A Christmas Carol is my dad’s favorite Christmas story. Though I’ve never loved Scrooge myself, it was fun to look at the story through different eyes. 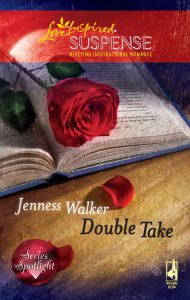 Sometimes I still have to think about the title to see if I said the right one. It was originally called Deja Vu, and stayed that way long enough that Christian Book Distributors had that on the book’s cover in their online catalog. (It ended up being changed by the publisher for marketing reasons.)

The title wasn’t the only change. The hero switched careers three times during the editing process. At first he was a guitar tech for a Christian band similar to Casting Crowns. (His cousin in the published version was originally the lead singer and good friend.) That career was nixed because it was too close to being a famous person, which is something LIS shied from, as their readers tend to prefer hometown heroes. At least that’s what they told me. Honestly, I think it was a nice way of saying that I should never ever ever try to write lyrics. EVER. Lesson learned. But in the final version of Double Take, there is a scene at a restaurant where a guy’s playing the guitar in the background. Just so you know, that’s the hero’s ghost, or clone, or…well, anyway. That was him in the first version. It made me happy to leave just a little bit of the old Cole still on the scene. Sans lyrics. 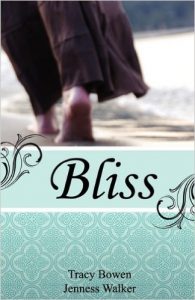 This actually wasn’t my first co-authored story. I did one in 8th grade with a dear friend, but hopefully that one won’t ever hit Amazon. Bliss was based in my hometown of Hobe Sound, so throwing in some of my favorite things was a lot of fun. The bakery has since closed, but Hobe Sound Deli is alive and well and definitely worth the trip.

The neighbors were a blast to write. Granny especially. Many of her quirks were borrowed from a friend’s granny. The money “hidden” behind lampshades? The paper sack purse? Real stories. The Singing Tree is also real, has been going for 20 years, and was my father’s brainchild. The first year the Singing Tree program was put on, I was in the very top row of the tree and quite possibly had my hair singed by Indie’s star.

I loved writing with Tracy, and we have more up our sleeve. Hopefully life for both of us will settle down at the same time, leaving us enough room to collaborate again.